It’s rare to find a film that can truly devastate you, but 2013 indie drama Still Life came very close. With a stark portrayal of a man alone in a thankless job surrounded by little more than grey-white walls and deceased loners, it leaves you clutching to the few rays of hope buried in the story.

Directed by Uberto Pasolini, who produced the likes of The Full Monty, the story centres around John May, a case worker for a south London borough who performs the task of tracking down friends and relatives of those found dead with no one to mourn for them. It quickly clear to see that John, passionate about his job, is one of the only people who cares about these lost souls. Even from the opening sequence, we see him attending funerals as the only guest.

Throughout the film, several questions are raised about the dead and how we approach, or don’t approach, discussing and treating them. Many people he deals with throughout appear to question why he even bothers, while others just don’t want to know. It’s clear that not only do they want the dead buried and forgotten, but death, too.

One phrase sums up the situation well: “funerals are for the living.” The character, John May’s (younger) boss, continues to assert that there is essentially no need for a funeral, or mourning, if no one is there. Suggesting that those with no one left to mourn them deserve no recognition for their passing. 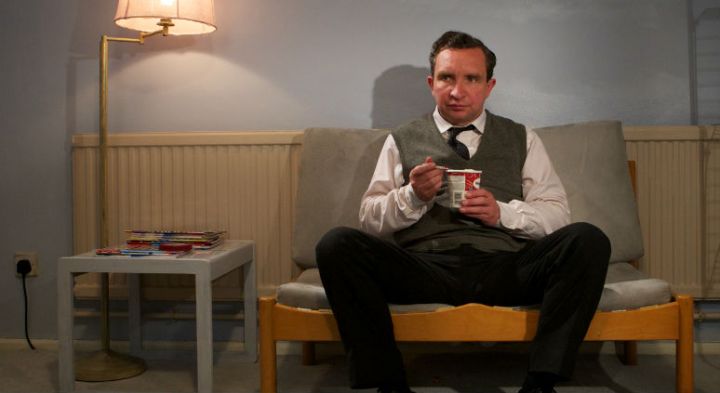 What makes the film so effective, drilling a cold shiver often through you, is the driving sense of catastrophic loneliness and obliterating starkness. From John’s lifeless office for one, to his grey-walled one bed flat where he enjoys a tin of tuna and toast each evening, it’s clear there is little life in his life. In fact, aside from those he’s forced to speak with through work, the only real interaction he has is with his photo album, filled with photos of the deceased whose family he never tracked down. This alone appears to be all the family he has.

While the average horror film may make you afraid to be alone, for fears a ghost may be hiding behind you Cheerios, Still Life makes you afraid of being alone for different, and very real, reasons.

When John comes across a case that turns out to be a man living opposite his own flat, he comes to realise he may be looking into his own future. Figuratively speaking. What he finds is a man, living in the same building as him, dying alone, with no family in sight. As he looks across to that empty apartment, he sees himself reflected. And it dawns on him, that could be him some day. It also dawns on you, watching it, that it could also be you. Which is more horrifying that the through that Jason Voorhees may or may not be lurking under your rhododendrons.

His understanding that he may be seeing what his future holds may also go so far as to explain why he’s so dedicated to the job he does. At points it even seems as if he embraces death. The first time John’s seen smiling is when he’s lying down in a graveyard. The spot, it appears, is his own burial plot he plans to use.

Whatever his feelings about his own mortality, John May’s character is delivered impeccably by Eddie Marsan, who makes the role both unassuming and wholly sympathetic, without at any point being pathetic.

A lot can be written about the end and everything leading up to it, but I won’t spoil it. But if you’re interesting in death and how we react to it, or just stripped back British indie films that make you feel both awful and elated at the same time, it’s definitely worth watching.